Article and photos by Frank Muller

Two years ago  I moved into the TREE neighborhood.  While I was leaving the best vegetable garden I had grown in decades,  I looked forward to joining a community food growing effort at Eco-Village. Growing food has been an important part of my life since early childhood.

If one compared images of the TREE community garden area from a few years ago to now, it might seem that it miraculously sprang up overnight. The truth is that planning and preparation for the garden have been years in the making. 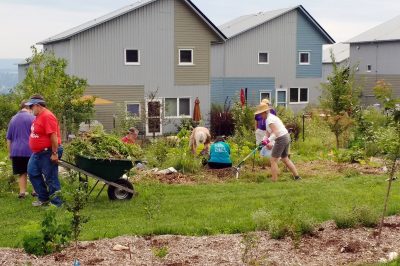 Back in 2010, landscape architect Rick Manning developed a conceptual drawing for the proposed TREE Community, including a community garden in the north field. As plans for the new TREE neighborhood progressed, a group of community members with a keen interest in gardening, permaculture, and food growing continued to shepherd the project.

TREE members Pat Evans, Lisa Ripperton, and Terry Hadley completed an in-depth permaculture course in the winter of 2015. For their course project they developed a permaculture plan, including maps and diagrams for the proposed community garden. They mapped water movement, land contours, plantings and fencing. Access for people, equipment and storage was included. The plan was presented to the full TREE community in April, 2015 and was positively received.

A first step in implementing the plan was the mapping of contours , with grass paths between the planted rows, and depressions on the uphill edges of plantings for water retention.  At the north end of each planted garden, edible forest garden sections containing dwarf fruit and nut trees, shrubs, and other edible plants were included. This extended along the western edge.

In Spring, 2015, eight rows were measured, plowed and disked in the garden area.  The soil was amended, and cover crops were planted. The garden rows were divided into individual plots for each of the forty neighborhood homes. Two years later, the Garden and Landscaping circle researched and developed a plan for a temporary fence.  Once the fence was constructed, people quickly began preparing and planting their individual plots.

I recently asked a few TREE members what a community food garden meant to them.  “It’s an opportunity for community residents to become more self-sufficient by growing some of their own food, and providing food for community meals,” said Bobbi Pollack.

Rosemary Rasmussen answered the question this way. “It’s another way we can grow our community and become more sustainable. A different connection and friendship happens over exchanging advice and seedlings.” And, Rosalie Richter added, “It means so many things:  just the generic joy of gardening; the joy of being able to pick food I have grown – not so much self-congratulatory as a form of appreciation of what nature provides so beautifully and, wow, I get to participate; being outdoors; participating with others in creating a beautiful abundant space; watching the plants grow and produce; magical.”

What are some of their favorite things about a community garden? Bobbi Pollack replied, “Watching crops come to fruition. Observing creativity from residents on how to structure and provide climbing structures.”

Jim Grant, who also took a permaculture course, offered the following, “I was glad to see permaculture principles such as contour lines, berms and swales being used. I appreciate the community process that includes people, plants, trees , butterflies, bugs and slugs and other plants sometimes called weeds.”

Rosemary Rasmussen added, “I like sharing the produce, and getting advice from the more experienced gardeners.”

Rosalie Richter offered her thoughts, “Cooperation and sharing and learning from each other. Co-sharing neighboring plots.” 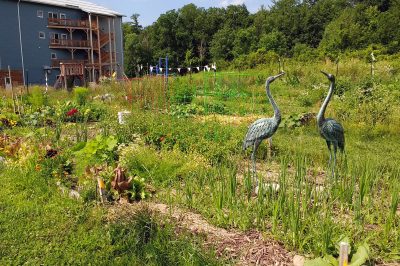 I can’t wait to experience the wonderful community and food that grows out of the TREE community garden in the years to come!