A Pathway into the Heart of the Natural World

One of the most critical features of our human march towards oblivion is our lack of connection with the natural world.  We call it “the environment,” a term which points to ‘where it is’ (i.e., surrounding us) rather than our relationship as part of the whole. If we are to correct our course, we must find pathways that reconnect us to the intrinsic worth of all life around us.  Through a recent multi-media presentation, EVI residents had an opportunity to tune into and connect to such a perspective.

Frank Muller, a TREE resident since 2015, is a nature lover and an avid and accomplished photographer.  When he first arrived at EcoVillage Ithaca (EVI), as soon as he had moved his belongings in he did what he always does – he rushed out to explore the nearest natural places.  Here at EVI, he did not have far to go.  He found that if he walked any direction for 2 or 3 minutes, he would be in woods or fields.  There was unexpected snow that morning, and what he had planned to be a short walk turned into a journey of several hours.  Since that time, he has gone on long walks almost every week, camera always in hand.

Recently, he was thinking back to the source of his love for nature – the trees, the flowers, the play of the sunlight on leaves, birds singing and flitting about, the graceful movement of water everywhere.  “I was raised on the south shore of Long Island,” he recounts.  “When I was young, the block where my house stood was surrounded by 200 acres or so of woods and fields.  My friends and I would race off every chance we got to wander and explore in these woods.” 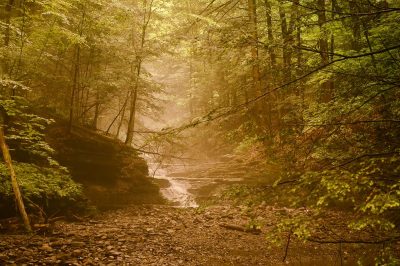 He was introduced to photography in 1972 when he entered high school.  He soon realized that his love of photography and of the natural world was “a match made in heaven.”  In his adult life, he has combined these interests in various ways: in taking tens of thousands of photos from many places around New York and as far away as Alaska and Costa Rica; in supporting the work of environmental groups such as The Sierra Club, The Nature Conservancy, and Cayuga Lake Watershed Network.  His photos have also been featured in a National Geographic article about EVI and in Learn at EcoVillage’s Annual Reports.

His nature walks are not just walks, but meditations, in which he is open to the beauty, the inspiration, and the joy of relationship and connectedness.  “I try to leave all the stresses and worries of life at home,” he said in a recent interview.  “I bring no expectations of what I might see, but go forth with only a deep curiosity, an openness to possibilities, and, of course, a camera.  I often stop at a spot, and use all my senses to experience my surroundings, down to the smallest things I can perceive; then I move several feet along and do the same.”

Frank has long been interested in collaborating with others in multi-media presentations.  When ‘spring was in the air,’ he began selecting some of the best of his spring photos of EVI and the surrounding area and putting them into a 15 to 20-minute video presentation.  He took this work to another EVI resident, Chris White, to explore collaboration.  Chris is a virtuoso cellist, who performs jazz and improvisational cello with groups small and large, both locally and throughout the US and abroad.  He is the founder and director of the New Directions Cello Festival, which completed its 23rd successful year recently at Ithaca College.  Chris took a look, and was happy to develop a cello accompaniment.

On June 23rd, 2017, Frank and Chris gave their first presentation of “EcoVillage Spring” in the TREE Common House.  Approximately 35 people, mostly EVI residents, were in attendance.  The video moved seamlessly from sunrise on the EVI south pond, to misty meadows, to moss on trees in the woods, to a redwing blackbird flying overhead, to a burbling brook.  Chris had recorded a track with a portion of his score, and he played a sonorous, peaceful accompaniment that fit nicely with the images, often playing a rich cello duet with his recorded self.  A loud ovation at the end of the performance signaled the approval of the new work by the assembled audience. 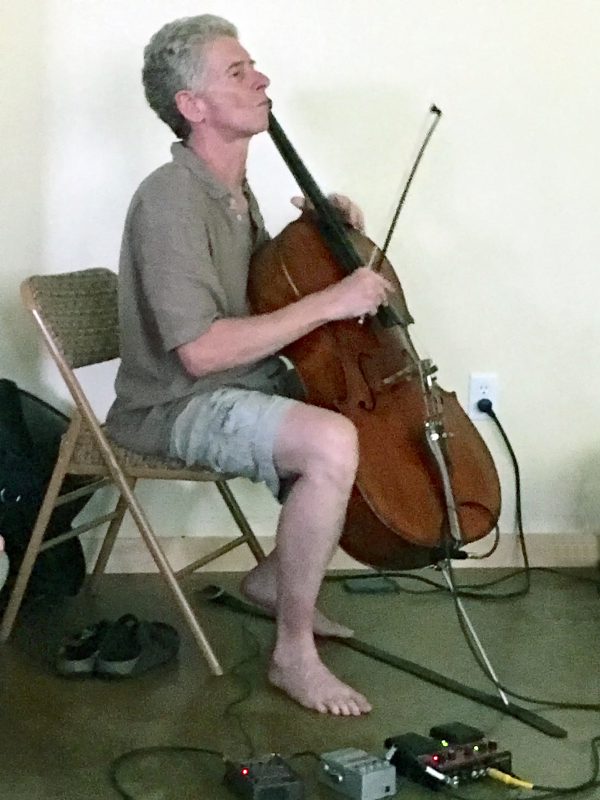 Several people spoke about how this presentation had given them new perspectives on EVI land and surroundings.  Frank’s favorite comment was from a young girl, aged about 5, who told him, “I really, really, really liked your pictures.”  A few minutes later, she came back and said, “I thought the cello music went really well with the pictures.”