Attracting families with young children: an Interview with Frederic Laloux

A recent demographic survey of EcoVillage found that there are 48 children who live here (out of 100 households). However numbers have dropped for the youngest set. We interviewed Frederic Laloux, a resident with two small children who decided to be pro-active in bringing more young families to EcoVillage.

LEARN:  When did you realize that the number of children in the village was declining? 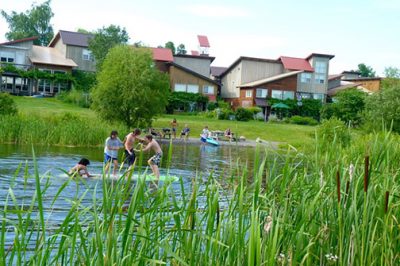 Playing in the village pond

RESIDENT: When I heard that two families with 7 children in the age range of my children, Raphael and Noemie, were moving out of the third neighborhood this summer. We moved here all the way from Belgium because, in our mind at least, this is perhaps the best place in the world to raise young children! When ecovillage was started, there were lots of young children around, so it’s really in the “DNA” of ecovillage. We never had to advertise what a great place this is for children, because it was so obvious to everyone. But the children of the founders have grown up. It’s time to welcome a new wave of families, and we should make it a priority to let people know that we are looking for new families to move in.

LEARN: What did you (and others) decide to do about it?

RESIDENT: I wrote an email to parents whose children Raphael and Noemie play with, to see how they saw things and if they shared my concern. There are still lots of teens, and also a sizeable number of younger ones, but not in proportion of what would naturally fit the village. As I said, for me this is probably one of the most amazing places to raise children in the US and beyond. But few people know about it, even in Ithaca!

The email I sent turned into a very long and active thread. Clearly, other parents shared my perspective. The Village Membership committee heard about the conversation and invited us to discuss this with them. In the meeting, there was a sense that there were lots of things we could do, but that the first step would be a village-wide conversation about the topic. How does the village feel about this? How much of a priority does this topic deserve?

LEARN: What were the results of the May 20th meeting on this subject? Were there ideas presented that were worth pursuing?

RESIDENT: The topic attracted a large crowd, and the conversation was very 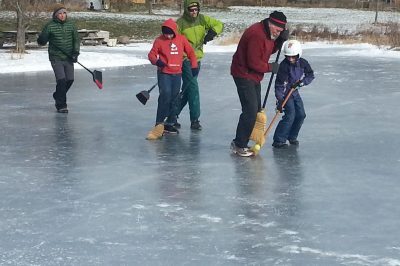 constructive. There was a profound sense that, for lots and lots of reasons, we want to keep and strengthen the intergenerational aspect of EVI, and want to purposefully attract young families to move in when houses become available.

The millennials in the room expressed how purchasing a home is often beyond the possibility of younger generations, and how rentals and affordability are key to attracting families today.

Many adults without children or whose children have grown up also expressed a wish to be more involved with children in the village, but we haven’t cracked how to make that happen.

We split up into four groups who brainstormed around various topics. A long list of projects emerged, practical things we can do. To highlight just a few:

* we need to emphasize more clearly on EVI’s website how this is a great place for families. We could organize events at EcoVillage with local schools (public, Waldorf, Montessori) to bring parents and children up here – many have heard about EcoVillage but have never been up here.

*  We could create an inventory of interests of adults without children and pair them up with children who have the same interests.

* We could create a loan fund to help families who are outbid purchase a home after all.

LEARN:  Where do we go from here? 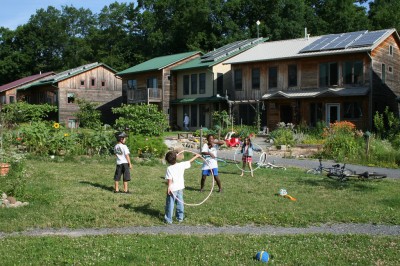 RESIDENT: I hope everyone reads the list of ideas that came out of the brainstorming, and that we all pick the one or two items we feel we’d like to do. If many people contribute, we can make this happen!  I will meet shortly with others to think about creating a core group and some regular events to keep the focus and the energy up for this topic! But don’t wait for us or assume that we can make this happen. Go ahead and take action.